This review of Kasper Akhøj’s “Welcome (To The TeKnival)” at Villa Sauber, NMNM in Monaco appeared on artforum.com: 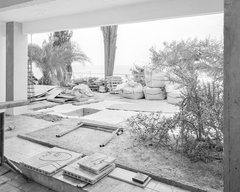 When Eileen Gray’s ill-fated 1929 architectural gem E-1027—a beautifully proportioned white modernist villa overlooking the sea at Roquebrune-Cap-Martin, near Monaco—opened to the public in 2015, the controversial restoration project that started in 2006 and saw successive teams of architects and administrators undoing and redoing each other’s work was far from over. Taken on five separate visits to the site between 2009 and 2017, Kasper Akhøj’s black-and-white photographs chart the progress of such work at the house. Variously displayed individually, as pairs, and in constellations, the set of fifty-nine framed laser-exposed gelatin silver prints in varying sizes is based on the shots Gray, who was also an accomplished photographer, took herself upon the estate’s initial completion. Her images were used to illustrate a special issue of L’Architecture vivante, a magazine edited by her lover, the Romanian architectural critic Jean Badovici, for whom Gray designed the villa. The cryptic name E-1027 stands for their joint initials.

Delicate gray adhesive letters beside the photographs on view combine the reference numbers from Gray’s photos with the dates of Akhøj’s visits, calling attention to a corresponding shot from her portfolio, as in 63V52017, 2017. Yet for all his rigor, the remakes bear only a passing resemblance to the stylish originals. Mostly sold at auction in 1992, iconic furniture items that were an integral part of the interior design either are missing or have been replaced by replicas and stand-in objects, such as makeshift tables, dusty chairs, and sundry building tools. As well as pointing to the tentative and provisional nature of conservation at E-1027, Akhøj’s works are a poignant reminder that architecture rarely stays true to its designer’s original intention.