This interview-based piece appeared in Chinese translation in the Conference Room section of LEAP magazine (issue 44): 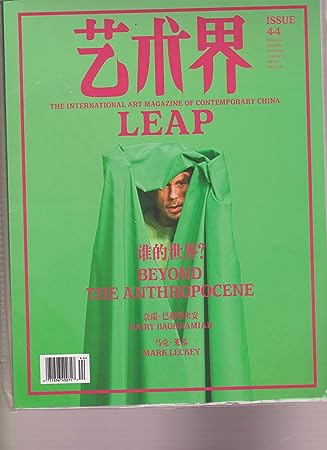 Hosted by Thyssen-Bornemisza Art Contemporary (TBA21), The Current Convening #2 took place in Fort Kochi, Kerala on 13-15 December, 2016, coinciding with the opening of the third Kochi-Muziris Biennale which was dedicated to, among other, water and hidden rivers. Set up by TBA21 founder Francesca von Habsburg together with artistic director Markus Reymann, The Current is a three-year exploratory fellowship program dedicated to research on the ocean–and specifically the Pacific Ocean and its archipelagoes. In addition to The Current fellows and expedition leaders Ute Meta Bauer and Cesar Garcia, who took part in recent expeditions to French Polynesia and Papua New Guinea aboard the Dardanella, TBA21’s own research vessel, this Convening brought together participants from the fields of art, ecology, law and policy-making to examine what the arts can effectively contribute to the debate concerning such pressing ecological concerns as climate change and deep-sea mining. The following text is excerpted from the three “structured conversations” or round-table discussions that engaged with the ocean as a mythical space, a complex ecosystem as well as a legal entity.

1. Unpredictable Oceans and the Monstrosity of the Sea

UTE META BAUER The ocean today is less explored than outer space. The three “structured conversations” address the urgency to protect the oceans as an irreplaceable resource for all forms of life and as habitat for tens of thousands of known and even a larger number of unknown species. Humankind has long seen the ocean as an unknown, monstrous and imaginary space. Such a view has been shaped by our limited experience of the oceans and is fed by mythological and cultural narratives that have been passed down from generation to generation. As the planet is confronted by unprecedented challenges in the age of the Anthropocene, including climate change, the rise of the sea levels, pollution of all sorts, overfishing and most recently seabed mining, it’s more important than ever to reexamine our relationship to the sea, to respect its manifold and complex ecosystem, to imagine new possibilities for coexistence. Admitting how little we know might also change our personal and collective attitude towards this large and powerful entity–the ocean.

DANIELA ZYMAN If the oceans are the last frontier, what does it mean in terms of the monstrous? Is it no longer the Leviathan–the mythical or biblical figure of the animal creature? Is the monstrous a figure that has more to do with global economies and the consequences to the oceans and the environment developed out of outrageous extraction strategies? One other picture of monstrosity: the Mediterranean that has lately become a graveyard of vessels and boats and people trying to cross the Mediterranean in the hope of accessing different forms of life. This has brought up again the need for us to intervene in those spaces with a regulatory system, trying to reconnect and create on a humanitarian but also a regulatory and ecological level new forms of legal bodies and entities that would allow this forgotten space to be redrawn and given a sovereignty that it has never had.

2. Ocean as Habitat: The rights of nature and the international law of the sea

T J DEMOS My provocation will be to try to get you to reconsider the term “climate refugee” and what that means. What happens when the ocean becomes a kind of “sacrifice zone,” a term that environmentalists use for when areas of oceans or land become dedicated to forms of extraction that basically give up any hope of saving or preserving an ecosystem’s integrity? We’re living through the sixth mass species extinction; we’re entering into a period of a mass refugee crisis where we’re running out of refuges.The humanitarian desire is to produce the category of “climate refugee.” It’s an incredibly problematic category. Climate refugee is not even recognized within international law. A lot of people, including in the Maldives, would resist this category because it tends to produce a victimizing objecthood. In certain ways it’s a fatalistic discourse that gives in to the end result of rising seas and submersion and the loss of territories. A term we could think of in relation to this: wishful sinking.

MARKUS REYMANN The ocean offers a habitat for 90 per cent of the species. So far we’ve mainly talked about one, which is human. If we’re talking about reconsidering the rights of nature and the concept of common heritage of mankind, or humankind, then we need to consider organisms other than the big charismatic ones, the dolphins and the whales that have pushed legislation forward but only because we can create empathy for them. But what happens to all these organisms down there at the bottom of the sea that have the sedimentation of one millimetre per square meter per year? […] The organisms down below are not to be mined; if anything, they’re to be farmed.

D. GRAHAM BURNETT The future of the protection of the ocean lies in the codification of rights in nonhuman creatures, from the microorganisms that are capable of metabolizing complex minerals right up the food chain to the charismatic megafauna that we can create a cognitive or an emotional relationship to. You’re not going to get people to take seriously the need for a legislation unless you can make them care. This was what did happen when people mobilized to save the whales and get an international moratorium on commercial whaling; that happened because a bunch of visionary folks, Greenpeace and others, began transforming how people thought about those animals. Here’s the link between saving the ocean, law and the kind of work that many of us as artists and creative people or scholars or writers do: it’s to say minds have to be changed and they need to be changed by making the kinds of ideas that are real, true and important dynamic, vital, unforgettable–to make them stick in our heads. That’s how it happens.

STEFANIE HESSLER Everybody who has a smartphone or a computer should care about deep-sea mining because it involves the extraction of minerals and rare earths from the seabed that are being used in consumer electronics, in batteries etc. We’ll most likely hear this term in the future because the extraction activity is about to become a reality. The conversation about deep-sea mining began in the 1960s with a publication by J. L. Mero entitled The Mineral Resources of the Sea. That book suggested there was a near limitless supply of what were called “potato-sized” nodules–metals that were found in the sediment of the sea floor. The early attempts to make deep-sea mining a reality failed as a result of the collapse of world metal prices; however, in the past decade, with the soaring metal prices, especially for gold and copper, deep-sea mining is on the table again. […] The nodules that are being extracted are not dead matter but actually living beings so speaking about the rights of nature and rights of other than human organisms is also important for this conversation.

AMAR KANWAR We need to understand what it is that we’re going to lose and, unless we do that, we will not comprehend the meaning of the crime. In a certain way we’re talking about a crime to be. And how do you respond to a crime that is about to take place? If you look at extraction, any kind of extraction, and if you look at the evolution of the law, you can see that it has a very close relationship with the whole process of extraction, wherever you go. The law gets conceived for extraction. Before a crime takes place, it is conceived; after you conceive it, you plan to execute it. You can see the evolution of the law is the crime already. So when you’re looking at evidence–what would be evidence of massive destruction on the bottom of the sea when you can’t access it or see it?–I would say that the crime has begun.

NABIL AHMED I’m from Dhaka and we have a very long maritime border with India. In fact, the very first maritime dispute boundary that was presented and debated in the international tribunals for the law of the sea was the maritime boundary dispute between Bangladesh and India. I would add that the seabed is also a spatial condition. The geospatial and the marine sensing that are used for those exploration purposes could be turned to monitor these and to set up a counter-forensics. Perhaps there is a way that these technologies could be shared to open them up to artistic practices that could use our kind of sensitivity, our background and experience to track what might happen. For example, I work around a landmine in West Papua. It is not a technical exercise; in fact, the work is there to support the self-determination of the West Papuan people. This kind of forensics must work with the people to whom these seas belong and not only to the state.

MARKUS REYMANN This is my question to everybody: how do we bring the dimension in which we operate to the table, persistently, in technical terms like the comments [TBA21 put] to the Mining Code at the International Seabed Authority or any other kind of authority. Becoming an observer to this United Nations’ body is for us–as a cultural agency, an arts organisation–an opportunity to insert a different language, a different thought and mode of operating. We saw it at the ISA, as soon as we start speaking their language we lose. It’s not going to change anything immediately but you have to be there, and you have to be persistent. It’s one drop, and another drop, and another. We’re there for life. But the beauty of this is that the crime hasn’t been committed.