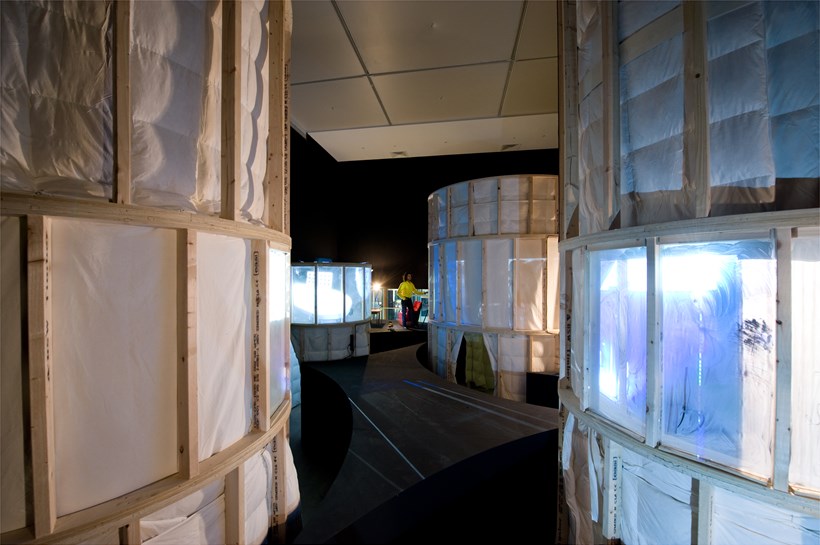 Alice Theobald and Atomik Architecture, It’s not who you are, it’s how you are, 2015, mixed media, dimensions variable.

A collaborative project by Alice Theobald and Atomik Architecture, It’s not who you are, it’s how you are, 2015, operates on different levels—quite literally. Mixing sound, video, and performance, the temporary structure they conceived together is composed of a sinuous black platform abutting four cylindrical, timber-framed towers lined with duvets. This immersive site-specific installation occupies a single, lofty gallery, and its hypnotic recorded sound track permeates the entire building.
Visitors are channeled along a circular route at ground level as they walk in and out of the towers, minimally furnished to look like a stage set. On the platform, two performers, from a cast of fifteen working in shifts, operate video cameras, whose feeds of the audience and surroundings are projected live at different heights onto the towers. When not on tech duty, the actors are performing ordinary actions and gestures: sitting, daydreaming, putting on a dressing gown, or occasionally lip-synching the script and singing variations on the show’s title, which is inscribed in one fluid line slightly above eye level within the towers.

Effectively blurring disciplinary boundaries, Theobald and Atomik Architecture’s multifaceted artwork perfectly illustrates the concept of performance architecture, a field mapped out by curator and architect Pedro Gadanho. Modeled on performance art, the term, as he sees it, applies to temporary, open structures built using ephemeral materials, with a focus on the body. Nothing if not vertigo-inducing, this theatrical, highly artificial scenario succeeds in making us acutely aware of how built environments construct and program our behavior.